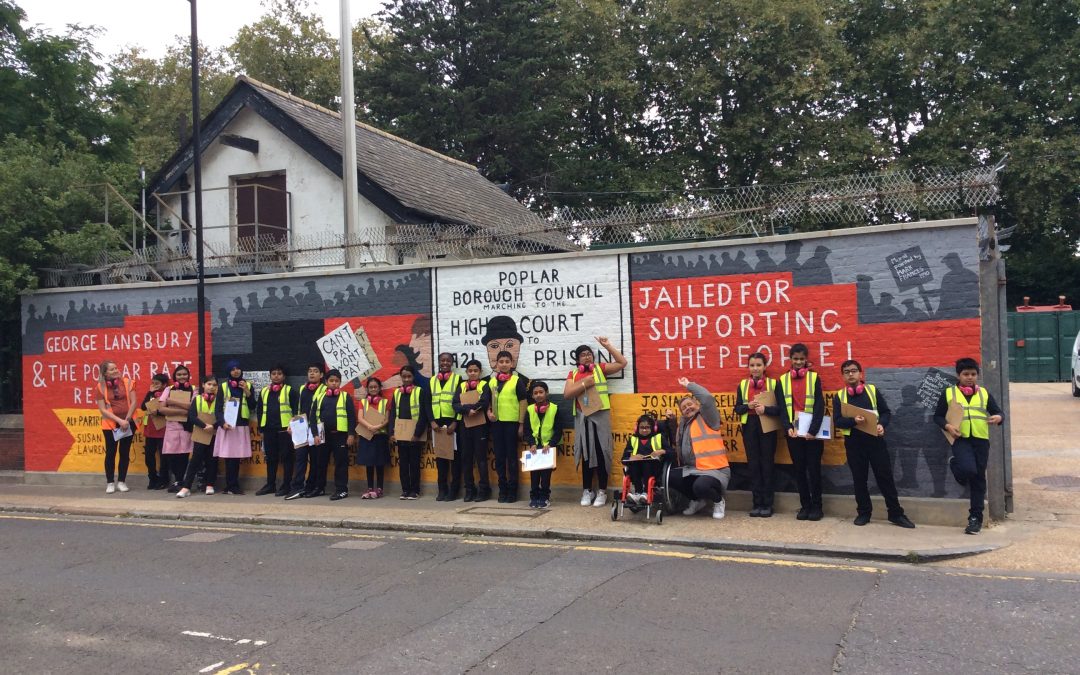 On Wednesday we went on a trip to roam places that were involved in the Poplar rates rebellion. In total we walked 3.2km! First we put on our vests and left the school through the office. On our way we encountered St Mary’s and St Joseph’s church. Next to the church there was a school. It was mayflower and kids were climbing on to the gates inside there playground waving at random people who happened to walk by. We were getting closer and closer to our first destination. A couple of minutes later we saw a cinema called Cine World, which I went in year 3 for winning the token prize! We watched the movie, Toy Story 4. In just a couple more seconds we were at our first stop. There we stood in front of the Museum of London Docklands. I could see many ducks and birds flying over the water. I could also see a medium sized boat right behind us. I put on my Now Press Play headphones and listened to a woman talking about the history of this place .Originally the museum was a warehouse in 1802.The building had 5 floors, which somehow was considered a tall building back then. Now buildings with 5 floors are only a dwarf compared to the skyscrapers we have today. In front of the building is where there used to be a statue of Robert Milligan, but it was removed in June 2020 as he was a British slave trader who owned 526 slaves in Jamaica. We also saw another school coming out of the building, perhaps they were on a trip to go inside the museum.

Not long later, we arrived at the Hale Street mural. The mural is an impressive area as it commemorates the Rebellion. On the way to the mural we crossed West India Dock Road and climbed over the station overpass. When we arrived at the bright mural we took a picture, standing in front of it. The mural was painted 3 times, once in 1990 by Mark Francis, next in 2007 and finally in 2021 , Monday September the 13th. By listening on the Now Press Play headphones, we found out that George Lansbury was a pacifist and socialist. The councillors made an improvement to the borough, making it a better place to live in for all the inhabitants.

Around the corner, we walked to the Lansbury Heritage Hotel, which used to be the Poplar Town Hall, where important meetings used to be held, which is way it is a significant place to Poplar. In March 1921, the government charged the borough taxes, which was more than the richer boroughs, however the councillors stood up to the government and didn’t pay as it wasn’t fair. Because of this, all the streets were full and busy with people protesting. A few months later in July, the government announced that if the councillors didn’t pay the taxes, they would be arrested, but that didn’t stop them. 30 councillors were sent to prison. 25 men were sent to Brixton and 5 women were sent to Holloway, including a women who was 8 months pregnant, Nellie Cressall. Minnie Lansbury and other women were willing to go to prison for their beliefs. No one had ever stood to the government like this.

Not long after, we reached out final stop, the Poplar Baths leisure centre. The original baths were built in 1852 and were re-built in 1933. While we were here, we learnt that the councillors were released on the 12th October 1921 and sadly Nellie was released September 21st and gave birth in prison! The statue of Richard Green (that is outside the baths) was built in 1886 and is still standing today. After our trip we rushed back to school and luckily made it at 3:30, ready for home time. Yay! That was the end of our amazing, but tiring, trip.