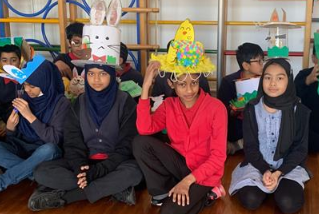 This term we have been learning about Rivers with a particular focus on What has changed and What has stayed the same about the River Thames? This was was our Geography focus for the half term and linked well to our local environment. We were able to experience Mud larking in Greenwich, which was a great experience!

Aaqib: It was a privilege to experience mud larking, because we managed to find old artefacts that had been buried and hidden in the banks of the Thames. I discovered the river banks were sandy, but became muddy when the tide came in.

Najibah: We also researched different Rivers of the world. I found out the Amazon River is the second largest river in the world, the Nile being the largest. The Mississippi River flows through 20% of the United States and ends in the Gulf of Mexico!
Humaira: We also made a flow chart to illustrate how flooding occurs from burst River Banks. Did you know, during February 2022, the River Severn burst it’s banks and caused extensive flooding in parts of Shropshire?

This term we have continued to develop our maths skills and practiced sharpening our areas to develop such as accuracy when answering arithmetic questions and becoming more confident to solve unfamiliar problems. We have also investigated finding the mean, we participated in problem solving activities during STEAM day and have recently enjoyed a maths workshop as a year group.

This is one of the highlights of the school calendar! After enduring two years of a pandemic, we were finally able to parade our hats with pride in the Top Hall with children and adults from Year 4, 5 and 6! This was our last ever Easter Hat parade and we made sure we had lots of fun making our hats and showing them off with friends.

We were all very supportive of one another and happy our friends were chosen to win the prizes.

Celebrating Success of others

We would like to make a special post for Arafha! Today she won the best hat in the parade and…also won a prize for the Fourth Plinth Schools Awards by designing a sculpture called Dream and Achieve! We are all immensely proud of her and delighted she has been asked to attend an award show in May! Well done Arafha!

Hirst Class would like to wish you all a Happy Easter and restful break. We know next half term will be busy and we are looking forward to the challenges it may bring.