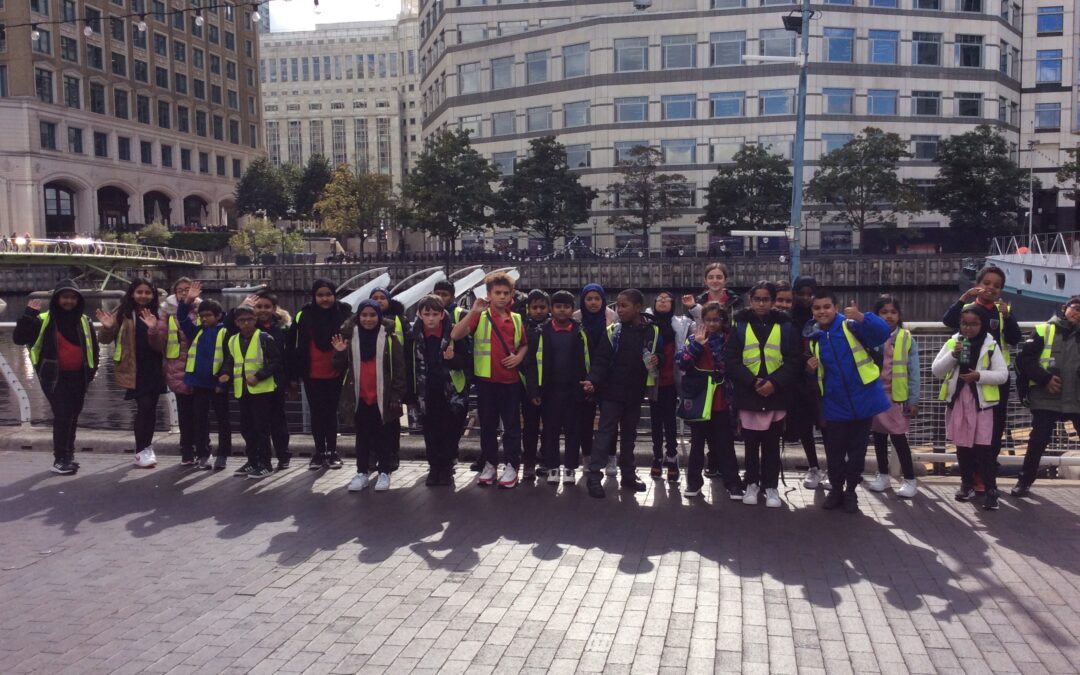 Today, we went on a trip to the London Docklands. (Sadiya)

First, we went to Langdon Park and took the DLR to West India Quay. We walked through the Docklands to the museum. (Tasnim A)

The Docklands Museum was a former warehouse and the London Docklands were the largest dock complex in the world at the time. (Rida)

We explored the museum. There were lots of special artefacts that we saw – for example this boat! (Aisha M)

It was built in 1934. (Ayaan) It had an important job collecting tow rope. (Ansaarah) It looked like a replica but when we asked the museum staff, they said it was real! (Aysha S) The boat looked newly painted too (Sofia) but it was actually 86 years old! (Taheem).

There was a Book of Statues (1809) which was a book about slavery (Yusuf). We learnt from the exhibition that slaves worked 18 hours a day and they started from ages 7-13 years old (Sawda). We also saw a photo of Olaudah Equiano, a former slave, who we have been learning about in school. (Manha)

We also saw a treadwheel, which was used to unload good from boats (Fatima).

In the museum we learnt lots of facts. For example, dock workers used a range of equipment to unload goods from the boats. (Tangila)

Then, we had lunch.

After lunch, we had a workshop with Victoria and Chris. We did some drama to show how the river level went up and down and how they off loaded good from the boats. (Ahmed)

We got to build our on pulley system in groups and lift 1kg of sugar using the pulley system. We learnt that sugar cane came from plantations in the Caribbean. (Rayyan).

We saw the Docklands – and saw it was possible to swim in it! (Ahmed)

This blog was written by the children of Kahlo Class!