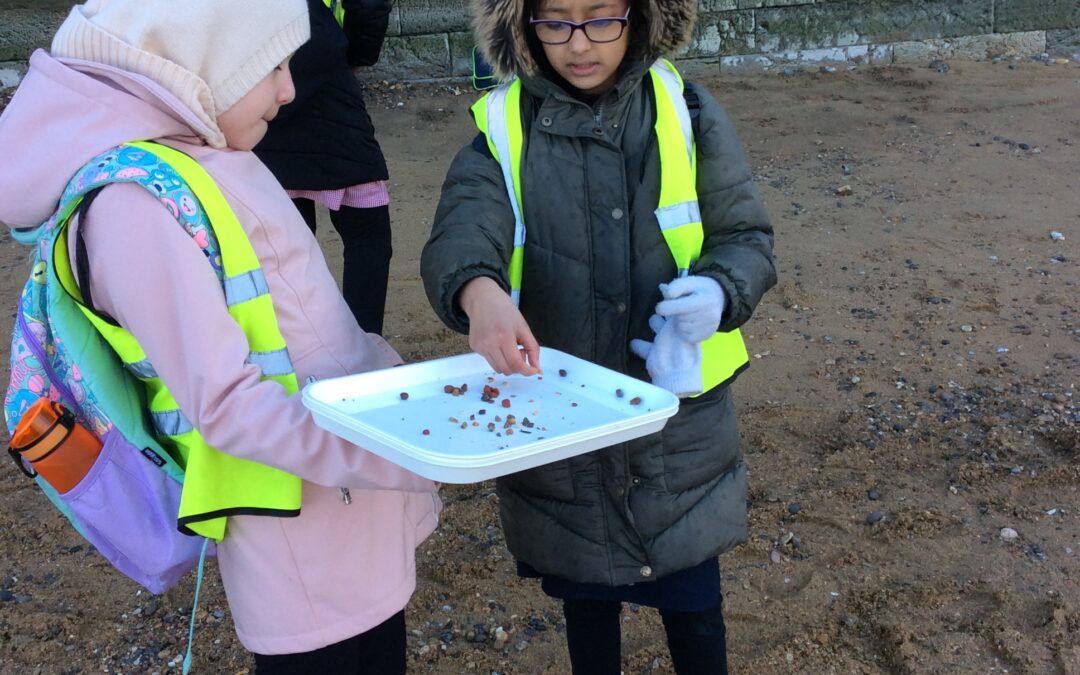 Today we went to the Old Royal Navy college for mud larking near the River Thames. We were looking for pieces of treasure from 2000 or less years ago. We all found: seashells; interesting rocks; old bricks; horse/cow bones; oyster shells; clams; Victorian tiles; bits of pottery and smoking pipes. We also learnt that 2000 years ago the Romans built Londinium, 1000 years later the Medieval people settled near the Thames; 500 years ago it was the Tudor times and then 150 years ago, the Victorian times. – Zainab H

Because our topic is Rivers this half term, we got to go to the Old Royal Naval College to do Mud larking. Near the Foreshore (River Thames), we were investigating and searching for rare items we could find. I enjoyed investigating as it was enjoyable and like an adventure. We found animal bones from cows and horses and also found ancient pottery. I learnt that pottery in the Mediaeval times was green as they could not make any other colours. – Amelia

This morning we went mud larking on the foreshore of the River Thames. We first went to the Old Royal Naval College. We then started digging or looking for old items. I found the fossil head of a small creature. I learnt that the red pieces of rock were actually old bricks and pottery. We mostly found bones and seashells. – Ridwan

Today we went to the Old Royal Naval College and did mud larking on the foreshore of the River Thames. We learnt about how the Romans were in London 2000 years ago, Medieval times were 1000 years ago, Tudor times 500 years ago and the Victorian times were 150 years ago. We were told by Simon about what we had to look for and what not to do while mud larking. We had 3 activities given to us to do which were: Finding things smaller than our thumbnail, finding anything the olden times used and also pottery and materials used during that period of time. The thing that I enjoyed was when we had to look for pottery because of the amazing patterns and designs on them. – Hannah

Today we went to the Old Royal Naval college to try the activity Mud larking. Once we got there the sand was covered in rocks and shells. Our goal was to find as many historical items as we could. We found pretty shells, jagged rocks and beautiful patterned pottery. We also found bones from animals such as horses or cows. I enjoyed looking at the oyster shells, especially ones with grey and white and bits of dark pink. I learnt that the place we did mud larking was called the foreshore. – Safiyyah

Today we went to the River Thames to find ancient items from either the Romans (2000 years ago), the Medieval times (1000 years ago), the Tudors (500 years ago and the Victorians (150 years ago). The area we went to was called the Old Royal Naval College. I enjoyed finding the different ancient items from other time periods. We found pottery pieces, oyster shells, roof tiles, pieces of tobacco pipes and even bones of horses or cows. We learnt the different types of pottery other ancient civilizations used. – Ibrahim

Today we went on a trip to the Old Royal Naval College. We went mud larking and we basically had to find little rocks and fossils in the foreshore. It was kind of like the beach and there were many rocks in the sand. I found a pipe that was something people used back then to smoke. There were many different things to find like poetry pieces, oyster shells and even more. – Fatima

Today my class and I went to a trip to Old Royal Naval College , we were very lucky to take half of Hirst class with us . We did mud larking near the River Thames and even though it was cold I still enjoyed digging for stuff. Most of us found lots of bones from cows, horses and lambs . We even found lots of roof tiles and pieces of interesting rocks and shells. Me and my class were lucky to get to do this activity , it was a very lovely experience for all of us. – Arissa

Today we went to the Old Royal Naval College to do some Mud larking. Behind the College was the River Thames and we found lots of interesting things like fossils, oysters and bones. I learned that I found a broken piece of a Roman pot. At first, I found it boring but when I found lots of interesting things I didn’t think it was so boring. It was really fun. – Mekayeel

Today we went to Old Royal Naval College and went mud larking. We found bones and tiny stones from Romans, Medieval, Tudor, and Victorian times. Our guide, Simon told us we had to look for stuff from 1000s of years ago. I enjoyed it when we kept on looking for bones. It was really interesting. Today I learnt that 100 years ago, when horses died they would throw the bones in the sea. – Nubia

Today we went mud larking at the foreshore of the River Thames, it was also very cold . We were looking for anything that might have been washed up on it from the olden days. We found animal bones, pieces of a smoker’s pipe, pottery, and man-made bricks. Also, we made a timeline (not on paper) of who lived in Britain, first, it was the Romans then the Anglo Saxons then the Tudors then the Victorians then the modern-day people. – Jaser

First we meet out teacher, Simon, and he told us lots of interesting information, like that London used to be called Londinium when the Romans used to live there. After he told us that we saw some boats go by, its trail was amazing, it was like there was a big snake following them and it made me amazed. Then after Simon told us the rules, we went down to the foreshore and he told us the first task, which is to find some rocks that are smaller then our thumbnail. It was super hard because the rocks were mixed up with sand. The second task was to find things made from many different materials. First we found some bones, but after we has so many bones. Someone also found a Asian clam shell. Simon said that it was super rare, but it was super small and it was cute too. – Shahidul

Today we went to the Old Royal Naval College. We went to the foreshore of the River Thames. I learnt that the Medieval times were 1000 years ago. Also I learnt that Tudor times were 500 years ago. I enjoyed feeling the jawline of the animal because the teeth felt very weird and it felt like a rock. I found lots of bones and smoking pipes. – Zainab K

Today I learned that there were lots of different time periods. Something I found was a horse bone that the people ate 1000 years ago when their horses died as a horse was the main transport people would use in the Victorian times. Something I enjoyed was when I found out that horses stay alive for only 2 years as they were not treated entirely great. – Remayssa

I found some pretty cool and interesting things including Roman, Tudor, Victorian and medieval pieces of pottery. I also managed to find some oyster clams and shells, which were eaten in all four time periods by the poor. Apart from the weather it was pretty fun. – Tahmid

Today we were mud larking. What I enjoyed was was collecting bones and glass since they felt good and soft, we found probably over 50 bones altogether and 100 shells. I learnt that in Victorian times they used copper to make the colour green. – Zayd

Today we wet mud larking and we went to the River Thames where we were picking up bones and things that Romans had used. I enjoyed seeing the bones and finding all the mysterious things from 2000 years ago. What  I found was a cow and horse bone and shells that they used. – Zeeshan